Kaje Vrukshalaya - Story behind the name

It has been my long time wish to have a unique name and logo to our farm. Giving a name does not change the farm, but it changes my perception of my farm.
If it means so much, i.e. ‘the perception’ of the farm itself, then the name and the logo should really mean something holistic, the entirety of the farm, not any reductive part of it. Such a name and a representative figure should also give an opportunity for the unknown, unexplored meaning of the farm.

This was quite a challenge. I initially thought of calling it ‘Kaje arboretum’, but this sounded too technical. An arboretum means a collection of trees particularly for their study, somewhat similar to a botanical garden. I later thought of the word ‘Kaje Tree School’ which was again a reductive term. It is true that I study a lot here and rarely I get to teach as well, but calling it a school makes it an obligatory place to teach.

After quite a while, we concluded on the name ‘Kaje Vrukshalaya’. The name was quite indian, understandable to people of karnataka and outside, both meaningful and abstract enough to cover the unsaid.

The logo was a parallel thought. I zeroed down on this concept of a girl hugging a tree quite fast and went to a very skillful and local artist Mr. Taranatha KairangaLa to draw it on paper. His very first sketch was quite convincing to me and represented the thought well.

To get this digitized, Raghupati Shringeri was an easy choice for me as I knew his style of sketches from the famous kannada magazine ‘Sudha’. After I had the digital art in hand, I just kept it idle for quite some time.

Naming anything is a big thing. It is a serious matter since it raises my own expectation of the farm and also any listener’s (it might also limit the perspective). Hence, I kept the name and logo in cold storage for a couple of years. But finally the tempting time came when a road extension started on my way to office where they were breaking stones. On my daily commute to office, I asked the friendly contractor, Iqbal, for a big piece of it. He let me choose it. He was very helpful in dumping it at my gate with his own tipper even without taking a paisa for it.

Later the stone workers helped me with carving and giving the required logo figure on it. Shilpa contributed with her writing using paint.


Making the stone erect was a big exercise in itself. We literally used the ‘mechanical lever’ in real life in the way ‘Archimedes’ used it!. Making a small oval raised bed around it and applying lawn grass followed in my free time.

By the way, after all this, who sees it?

I see it. I see it every day and enjoy the look of it. I enjoy the slowness in which it was made. I enjoy its ‘localness’, to the extent I could achieve. Many of our visitors (relatives/strangers) see it as well and enjoy. I try to get a photograph of our visitors with the stone to preserve the memory when possible. Particularly enjoyed when Mr.Nagesh Hegde visited us for half a day.


Name is not everything, but it is alteast a part of everything. Let the name not be the boundary or the limit, but it can at least be the center where everything begins.

Seeds as gifts and souvenirs! 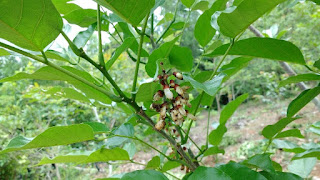 Soon after marriage, shilpa (needs no mention – my wife) and I went to Andaman by a package tour. Package tours are almost like ATM machines. They give us specific instructions and one can only do those. One of the days, as part of the package, the cab driver took us to the shopping streets. We didn’t find particularly interesting stuff with some utility along with beauty. We didn’t buy anything. However, we wanted to take back some thing as souvenir. One of the beaches where we visited offered us something better, for free. There were a lot of assorted seeds of many types, carried ashore by the altruistic waves doing a kind favor to the mother plants producing buoyant seeds. We collected 30 seeds of some 8-9 varieties. 2 of them just looked like green sticks of 1 foot each. I couldn’t imagine what they were. We sowed all of them and these 2 sticks horizontally on ground. In some time, many sprouted. Regarding the peculiar looking sticks, from the narrower side the sprout came
Read more